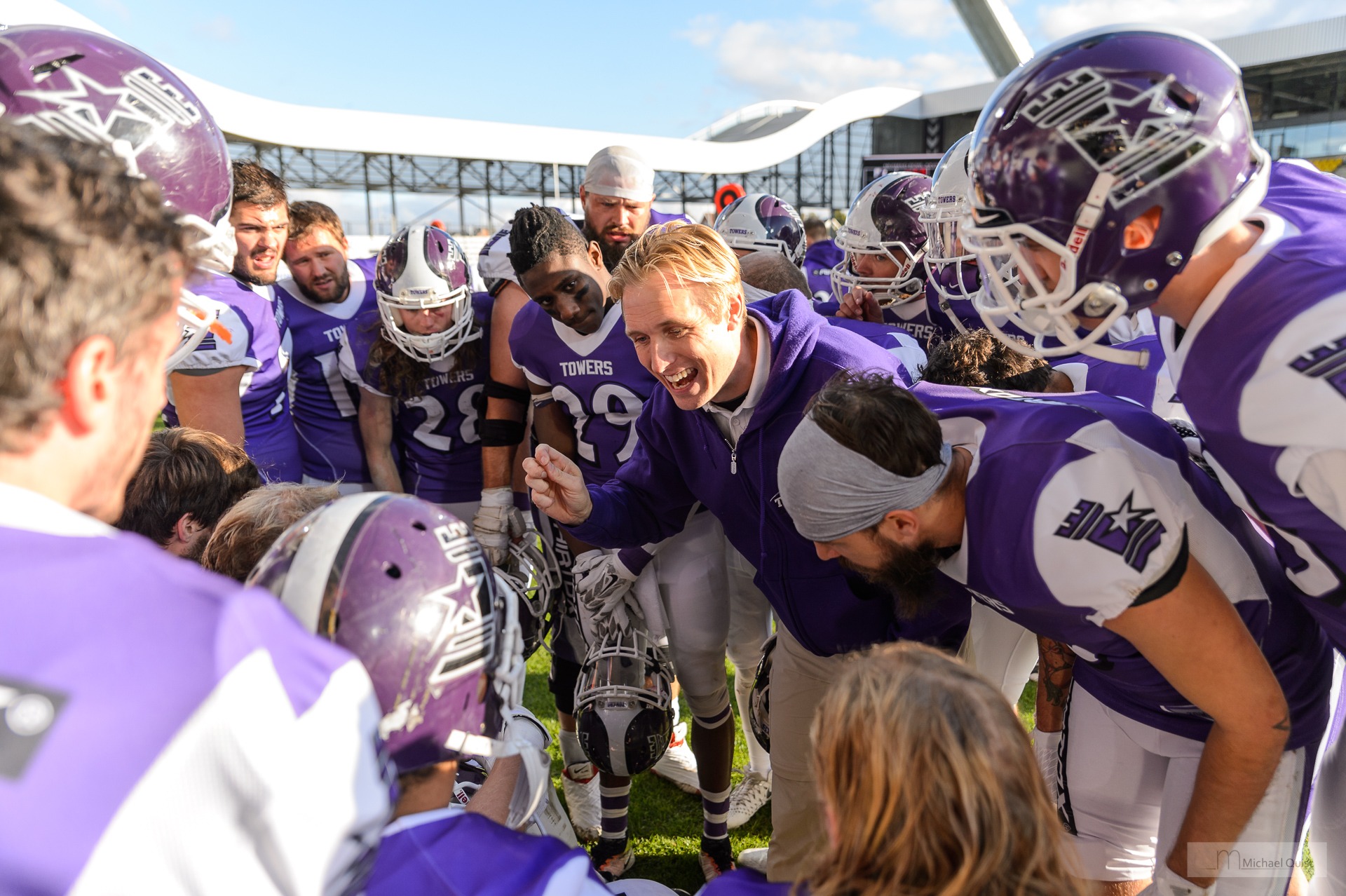 There are a lot of familiar faces to be found on the Towers sideline for the 2018 season. After a fantastic 2017 season, there should be no doubt in anyone’s mind that this coaching staff is one of the premier staffs in Denmark.

Leading the way as Head coach will once again be Peter Herbild. Athletic Director, Anders Skovgren, on Peter Herbild: “It’s an immense pleasure for the Towers that we continue to have Peter Herbild as our HC in 2018. Peter has always had a focus on development. Not just the team’s development, but his own and his staff’s development as well. Peter Herbild is a skilled leader of both coaches and players. He focuses on what’s important, giving room for individuals, both among players and coaches, and he has a special ability to motivate. I find that Peter is still top motivated and engaged in the NL team and the Towers in general. Like him, I have great expectations for the 2018 season, both in Denmark and abroad”

He is a short overview of our 2018 coaching staff

DB, and Team Captain, Magnus Bitsch on Peter Herbild: “I am very grateful for Herbild as a head coach and driving force in Towers, but also as a person. He has been a dominant figure in my development as a player. Countless times I’ve thought to myself: “This is a stupid footwork or scheme he has set up” – after which I find out that this was the way to beat our opponents. In addition to being a great coach, he is incredibly good at focusing on how to beat a specific opponent and does not waste time solving more or less unrealistic scenarios”

DT Kristoffer Brun on Victor Andersen: “Victor is a coach who takes his job very seriously. He is always well prepared and has an end-game with his reflections.”

RB Michel Jr. Konate on Simon Sonnesen: “Sonnesen is without any comparison the best coach I have ever had. Without him I would not have the football knowledge I have today. He is a motivating and determined coach. When you get to practice and have a coach who believes in it more than you do, just shows how motivational Sonnesen is as a coach”

OL Joachim Christensen on Jesper NP: “NP is a coach who dedicates himself into getting results and demands his players to play at a high level. He cooperates with players and doesn’t only dictate, and he has a great attitude towards the game of football”

DB, and Team Captain, Søren Bendixen on Niels Roest: “Roest has managed to lift a talented group of DB to a complete no-fly zone. The group were already one of the best in Denmark, but with the addition of Roest as the position coach and his expertise, the group has well established itself as the best in Denmark. Roest has delivered a profound insight into the mechanics and theory of the DB position – an insight that has benefited the whole group, from starters to backups. Every DB always know what each other is doing on the field, which has resulted in an unmatched team performance in coverage; a recipe which is extremely hard to coach – and beat”

WR Aske Troen on Casper Bo Jensen: “Casper is former team mate and came in as a new coach for a experienced group of WR and that’s not easy! As a former RB, Casper made it clear that he would focus on improving our blocks and physicality! And that part of our game has become much better and we can thank Casper for that! He is always positive and in a good mood and that always affect our group even if we are tired of his blocking drills”

DB Simon Maak on Peter Nordentoft: “Peter is a former player with a lot of experience and tips to give regarding technique and especially how to adjust the approach to different type of receivers. We have a lot of individual time to work with him which helps a lot when we are in competitive situations”

There have also been some few new additions to our coaching staff.

Lau recently retired from his role a as player and team captain on our NL team. Lau has been in football since early 2000s and is a well-known name in football-Denmark. He’s known for his great hands and feet, and his exceptional football-IQ that has led him to be a top WR in the Danish National League for more than a decade.

WR Aske Troen on Lau Mikkelsen: “I have played side by side with Lau several years now and he will be missed on the field! But getting him in the coaching staff is a huge asset! Lau has played football for many years and has always been very helpful with solutions and suggestions for game calling. I expect him as a coach to get heavily involved in our passing offense and I hope that some of his attitude is carried on by our WR group. Lau and Casper will complement each other very well and I’m sure that with these two coaches, Towers WR’s can continue their development”

Henrik Schwarz is a familiar face with the Copenhagen Towers, as he has been a coach with the Towers since 2014. Schwarz has been coaching for more than 10 years and his extensive knowledge will be very helpful when he is going to manage one of the most talented groups of players on the roster. Head Coach Peter Herbild has made it a clear objective to develop and integrate TEs to his offense, and there is no-one better to fix this assignment than Coach Schwarz. Schwarz is currently the OL coach of the Danish U19 National Team.

OL coach, and former teammate, Jesper NP on Henrik Schwarz: “I’m looking forward to bringing Schwarz to the national league staff, as Schwarz has a huge football understanding and can contribute a lot to an already strong technically skilled staff. Besides this, I look forward to the extra energy that Schwarz brings to our practice field where he expects the best of his players. If they do not deliver to the level he expects, players will know. I like that”