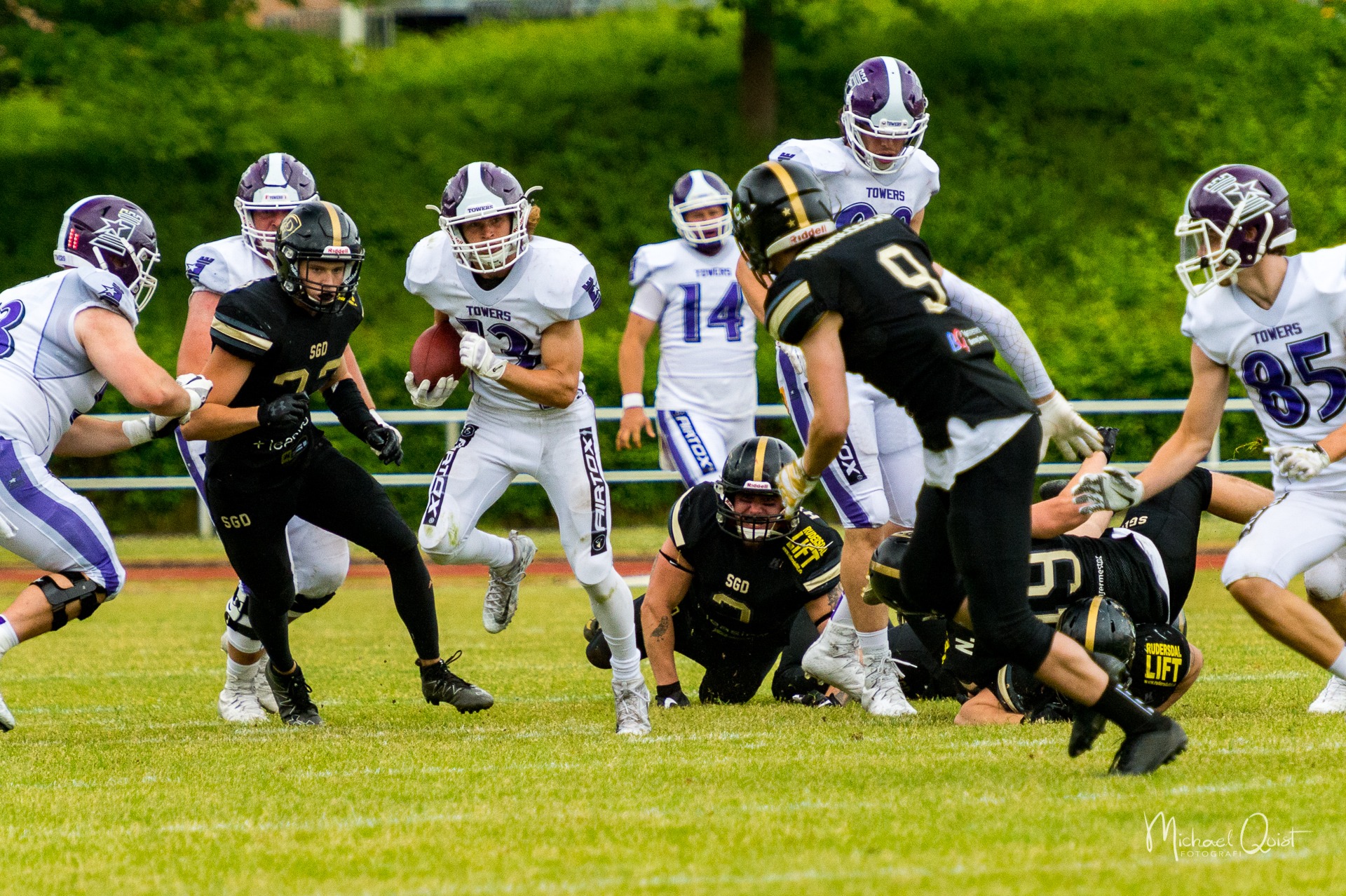 Towers rack up 70 points in win

The Towers and Gold Diggers combined for a whopping 116 points in an incredible offensive shoot-out at Rundforbi Stadium.

The two arch rivals came into the game at very opposite ends of the standings table for the first time in years; The Towers at 2-0 and the Gold Diggers at 0-3. Yet few would have predicted that when the dust settled on a very long game, the Towers would win 70-46.

The game was the first game in purple for new Towers QB, Randy Schroeder, who arrived in Copenhagen in the middle of the month of May. He played a very good first game. When he returned to the bench in the 3rd quarter it was not because of his play, but simply in order to give playing time to QB Kasper Skyum.

Towers assistant head coach Victor Andersen gave credit to Schroeder: “He fits right in with the team and has great touch on his passes.” Schroeder did throw four touchdowns in basically one half of play, while Skyum added another and also ran for a touchdown.

Talking to Towers Media’s Ralf Dietrich after the game, Schroeder gave credit to the offensive line: “They kept my jersey clean all day”. And the Towers offensive line was in fact once again outstanding. Anytime an offense puts up 63 points, you know that the offensive line performed extremely well.

One of the things that the Towers’ coaches liked, when looking at Schroeder’s film was his ability to hit TEs in the middle of the field. That is something that he certainly did in this game, as highlighted by TE Jesper Hansen’s 70 TD catch.

The Towers’ running backs and receivers had a field day, too. Dayton Winn alone scored three times and rushed for a total of 142 yards.

One could argue that the defense did not live up to it’s usual standard, but there were plenty of highlights nonetheless. One such highlight was DB Simon Maak taking an interception more than 50 yards to the endzone in the first half.

Defensive Coordinator Victor Andersen explained that the team has a very clear ambition to win European games this season. For that reason, the defensive scheme over the past few weeks has focused on the Carlstad Crusaders. That meant taking a calculated risk against the Gold Diggers. And against a potent Gold Diggers offense such a calculated risk can become somewhat exposed.

This was the most points scored by the Towers since beating the Esbjerg Hurricanes 76-2 in June 2013.

Look for the game to be made available at Zibra Sport soon.