With a convincing season, the Copenhagen Towers could once again lift the trophy and claim the national title. – A season completed with the fulfillment of relinquishing a team objective: reclaim the Mermaid Bowl.

But not all of Towers endeavors were successful. The Towers were yet again defeated in their European hunt for a title in the Champions League. With a loss to both Karlstad Crusaders and London Warriors, the dream of international achievements ended before it even started.

That was 2017 – and with a new season comes new aspirations. But is the European conquest even in reach for the young team? – What does it take to raise the bar?

We talked to head coach Peter Herbild about the ambitions for the coming season of 2018; a conversation that involved raised expectations and investment towards Champions League; recruitment of imports; and the continued improvement of the Towers organization: An Ambition for Europe

“The Towers have an enormous hunger for European success” states Peter Herbild. “A lot of these players have won the mermaid bowl (The national championship) 2-3 times; now there is an immense desire to achieve international success”. Something which still awaits the Copenhagen team. The last four years the Towers have only won a single international game. But the tides might change. “The club has developed an impressive economy which allows the Towers to invest in 2-3 imports for European success,” says the young but experienced Head Coach and adds: “I consider the Towers to have a window of 1-3 years for reaching an international triumph – but it begins this year”.

When asked about the difference maker compared to the last couple of seasons, Herbild responds: “We got to score points!”. Since 2014 the Towers have only scored 3.5 points per. international game – “and that’s why we have offered league MVP, Dayton Winn, to rejoin us for the next season,”. Dayton Winn made a huge difference for the Towers in 2017. With Winn in the backfield, the Towers possess a compelling threat against every European opponent. But is it enough? Defensively the Towers maintains confidence in their roster. The defense has played solid facing the international opponents. The focus internationally lies in strengthening the vigor of the offense. The Towers are therefore looking for a proficient American quarterback who can lead the potent young offense. “To compete at an international level will require at least two top talents, – and one should be a quarterback” Peter Herbild reveals.

Together with a talented roster, the Copenhagen Towers have through the years gathered a capable and skilled coaching staff. “Our coaches are young but tremendously talented and experienced,” Herbild says. The last couple of seasons the coaching staff have grown with a lot of qualified newcomers from outside the club. Every aspect of the organization – from junior to senior – has prospered from the influx. It has allowed the Towers organization to realize the most fertile and productive setting for generating talented and ambitious football players. A development the Towers now can pick the juicy fruits from. “We have a talented group of young rookies from our own junior department coming up. We are very proud and look forward to integrating them into our senior team” Herbild states. The European ambitions are evidently a product of this organizational evolution and progress. “It feels comparable to our team journey for the first mermaid bowl in recent time (in 2013). It requires physique, technique, and mental advancement to accomplish – but we have the dedication and ambition”.

Even with all the talk about Europe, the enthusiasm towards the national league remains the same. “We want to win the mermaid bowl every year” The Towers HC claims with confidence. The national league is always a challenge. The focus has not been distorted; it has been adjusted. The Towers will dispose their focus in the spring on realizing their ambitions for Europe – which might cost a game in the first part of the season. But after the summer break, the Towers are once again dedicated at contesting their national title.

The expectations are high. So is the potential. With a strong addition of new players to the club and an additional 2-3 import player, the ambitions should be so. The joy of Mermaid bowls are sweet, but a European fairytale might be in line for the Copenhagen Towers. 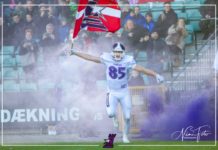