Copenhagen Towers
Hjemme Ekstern Towers Spring season in the books
Facebook
Twitter
Google+
Pinterest
WhatsApp
Linkedin
Email
Print
We have reached the summer break of the 2016 season in the Danish National League. The spring season was good to the Towers as we racked up a 6-1 record, signed a major sponsorship deal, broke in our new stadium and showed off new uniforms.

We have played seven of the ten games in the regular season. Three at home, beating the Rebels, Demons and Razorbacks, while we played four road games, beating the Stallions, Rebels, Gold Diggers and losing to the Razorbacks.

We’re the top ranked offense in the league, scoring 266 points and also the top ranked defense, allowing only 76 point. That averages out to a score of 38-11 pr game. Our only loss came at the hands of the Razorbacks, who beat us 31-30 on a Saturday night in Vejle.

Early in the year we were very happy and proud to sign a sponsorship deal with AIRTOX International. It’s a deal that has helped and will help the Towers in a number of ways. Most visibly, our new uniforms bear AIRTOX’ logo on the backs of the jerseys and along the side of the right legs.

The new uniforms come with both purple and white jerseys. On the day the uniforms were shown off to fans and the public at large, our coaches and players had chosen all-white uniforms. It was a beautiful day and the uniforms looked great.

Add to that the fact that we beat the defending champions and broke in our new stadium in those new uniforms and it doesn’t get much better. Don’t forget to watch our highlight video from the game…!

Having been away from our regular stadium field for two years has been tough. But the newly renovated field, with new fan facilities, was worth waiting for. We had each of the 300 seats filled and a lot of fans standing, when we beat the Razorbacks. We couldn’t have asked for a better or louder home crowd. This bodes well for the future of Tower Nation.

Now the Summer break awaits. On August 16th at 14:00 (2 p.m.) we host the Aalborg 89ers. We hope to see all of our fans again then. Until then; thank you for being Towers fans and enjoy your summers. 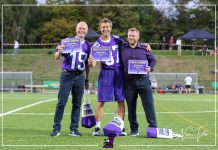