The Oaks put up an admirable fight, but in the end they were not able to stop the Towers from racking up 40 points in front of 534 enthusiastic fans.

The Towers opened the scoring with two touchdowns through the air in the first quarter and added two more as well as two on the ground in the second quarter. By rule, the clock starts running once a team is up by 35 points or more, so the second half went by quickly and neither team scored.

Running back Dayton Winn is back with the Towers for a second season and made his mark with two rushing touchdowns.

The Towers made full use of our roster and made sure to rotate in back-ups on most positions in order allow as many players as possible to gain valuable game-time experience.

The Towers occasionally looked off the mark, but that is to be expected in the opening game. After the game, head coach Peter Herbild told Nationalligaen.dk: “I’ve never had a season opener, where I’ve been really happy. There are always so many things that have to be fixed.”

The settings could not have been nicer, with almost miraculously sunny and warm weather. Quite a lot of the 534 fans chose to sit on the grass mound opposite of the covered grand stand to soak up the sun.

The Oaks are new to the National League after dropping out at the end of the 2004 season. However, they played with tons of heart and discipline. And they brought an impressive fan base that was loud and knew when to cheer.

The National League has introduced roster limits prior to this season, so the Towers were limited to 44 players in uniform for the game. At the other end of the scale, the Oaks dressed 27 players and thus satisfied the 25 player roster minimum. 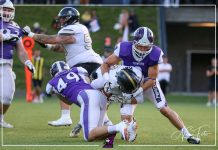 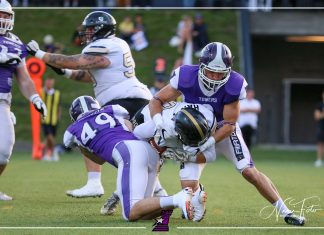